“Lucien was horrified. He had managed to get close enough to the meteor to grab one of its crystal shards, he had actually gotten hold of one, and all he now needed was to escape the scene alive. But now this elemental had appeared out of nowhere. The ground was suddenly covered in water and its immense force was crushing Luciens unit all to fast. Luciens unexpected luck had run out, and he feared that this mission was all in vain.

Adrian, Samson, Fabia and Gail had all been crushed in the waves, their bones once more scattered. Of Luciens band only Kade was still standing, clueless of his friends demise. Lucien looked into his empty eye sockets. He knew that even if he by some miracle managed to escape, he would have to come back for their bones later, or the whole trip would have been pointless. Either way, he had no choice, this was what he had sworn to do, his promise to them. He readied himself for a desperate battle for survival.”

Another Illustation step-by-step! It’s very fun to work on paintings again and I wanted to keep coming up with more lore and characters for the BotM universe. I also used this illustration to practice painting water and a more extreme perspective. Tell me what you think!

When I began sketching this I honestly didn’t have a clear plan in mind. I had the idea of the water elemental and the frog perspective, trying to make it look really threatening, but I wasn’t actually sure what to put in front of it at first. Eventually it started to take form however. Below you can see the first steps of the process. This is by far the fastest part of painting the image and often the image actually doesn’t change very much after this:

At one point in the process I felt that the image didn’t have enough depth, so I added a lighter fog between the wave and the character to push the wave backwards, making the distance more apparent:

This image didn’t have that many dramatic changes during its creation so I won’t go into detail more than this. Since I’m still trying out doing these “step-by-step” posts I’d be happy to know if you have any though on them. Would you like me to go into more or less detail, do you want me to post more images showing the process?

Thanks for reading, the finished image is below! 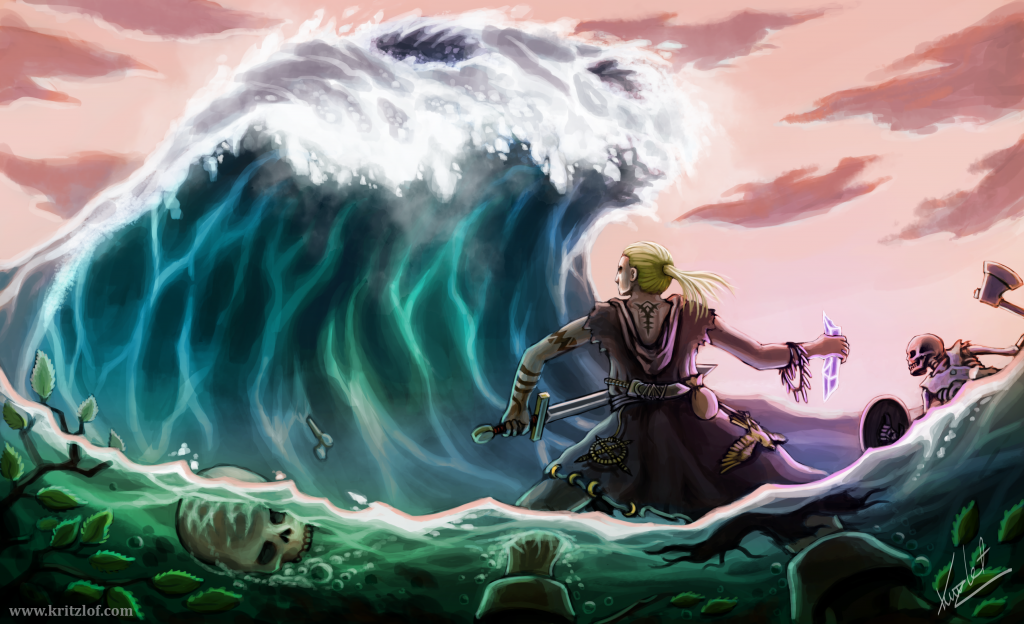