So in my last post I mentioned that I was going to explain my thoughts on the name of this game. Bear with me if this post gets a bit long. As I’ve said, “Battle of the Meteor” was simply the first name I came up with and I started using it as a name for the project. However, after a while, I started feeling like I should think the name through more and come up with something with a cooler sound to it.

As I’ve been going around thinking about this game for the last six months, I’ve also developed a little story line in my mind that expands further than this board game. Therefore my thought has been to also make sure that I have room to possibly make more games that connect to this one and I wanted the game title to also give that possibility.

The story of the game’s world is that a magical meteor with fantastic and/or terrifying power falls from the sky. It then affects the world around it, both through its’ magical power transforming the surroundings and in the inhabitants of the world either fearing or craving it. The setup for this game that I’m currently developing is of-course the initial battle of armies as they want to claim the meteor for themselves. 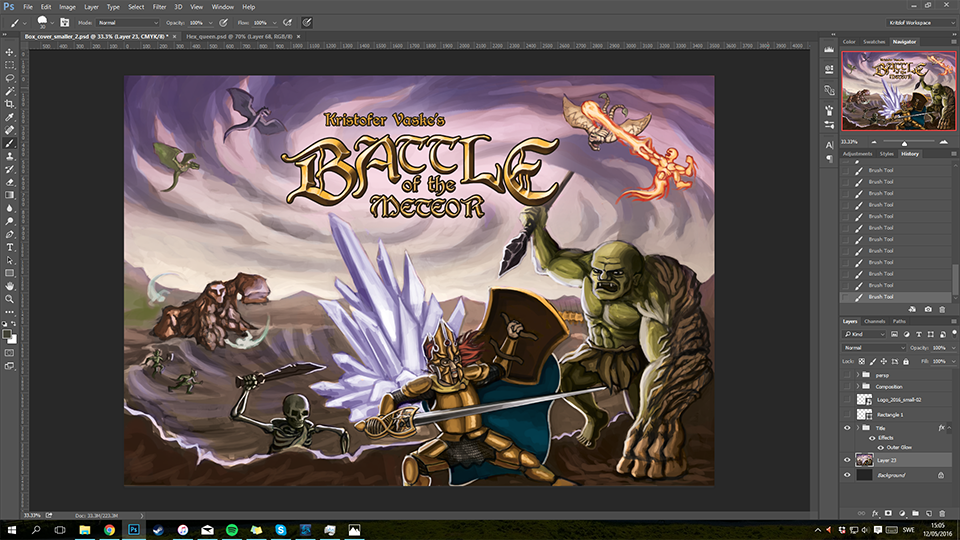 So the way that I thought that this could have to do with the naming was that a part of the name, preferably something about the meteor, could be the same for all the games in the possible series. To get more input on the issue, I made a survey that I sent out to some people I know, just to not make the decision entirely based on my own conception. The two alternatives that felt most promising after this survey was – “Encounter – Shards of the End times” and (a bit surprisingly for me) “Battle of the Meteor”.

In these cases, “Shards of the End Times” could be used as a subtitle for more games (indicating that the shards of the meteor are somehow related to an apocalypse that the games are about) or subsequent games could be called “(something else) of the Meteor” (indicating that it’s all a story about the same meteor that somehow affects the world that it fell into).

I was initially leaning a lot to the “Encounter”-name. I thought it looked cooler and more “hard core” and I had at this point become very skeptical to my first project name. However, as mentioned, I was very surprised to see that many of the people I asked actually liked the original name, and this made me think it through a few extra times and – as you might have guessed – actually settle for “Battle of the Meteor” anyway.

My reasoning goes like this: My game is meant to be quite short, simple to learn and it’s also quite colorful – so maybe choosing the most hardcore and cool name I can think of actually isn’t the right call. Maybe “Battle of the Meteor” feels more straightforward and accessible. Also, I’ve already been working on the game, using this title, for about six months and although this is not at all impossible to redo, “Battle of the Meteor” already gives good results when I google it and doesn’t seem to be used by anyone else. Because of this, I’ll stick with the name as it is now and hopefully people will like it as it is. You can also see the current design of the name in the image of this post.

If you read this long post all the way here I thank you for being interested in my game! Have a great day and stay tuned for more updates. If you have any thoughts or comments, feel free to leave them below or to contact me in some other way.