Another important part of the game “Valhalla, Raids & Gold” is, of course, the overworld map. This is where the player expand their territory and manage their income. The player starts off with only one viking village, but will soon conquer barracks, dungeons, farms, mines and more. This in turn will increase the players income and let them advance in the game.

When producing this kind of art for a game, it’s important to have a consistent art style. Because of the number of assets that needs to be produced, it’s also very important to find a style that can be produced in a reasonable amount of time. Also, it’s better the more you can plan ahead to minimize reworking assets several times. I’d say this is something that I didn’t do optimally in this project, and some of the tiles have taken far more time than they should because of indecisiveness of details and reworking. It also took more time because of most tiles having several tiers that all needed their own art, and it took a while before the final number of tiers was decided.

The look of Valhalla, Raids & Gold is quite reminiscent of a board game with its hexagonal map tiles. I’m personally very fond of games that use hexagonal grids, and I think it’s a fun shape to work with (hence its appearance on my logo). It was however a challange to work with such a small space for each map tile. You want to fit a lot of things in each tile, but you also want them to be clear and each element to be large enough  so that it’s easy to interpret. Because of each tile having the same size it was impossible to keep all environment elements at a consistent scale. The fact that a mountain range is about the same size as a rune stone on another tile is something that you as a graphical artist working on the game just have to accept.

For each project I work on, I learn a bit more how to optimize my time. Both my technique and my understanding of the process gets better. Even though they took a long time to produce, I’m quite happy with the look of the map in the game. I feel that the look is consistent and there are many different tiles to discover in the game. 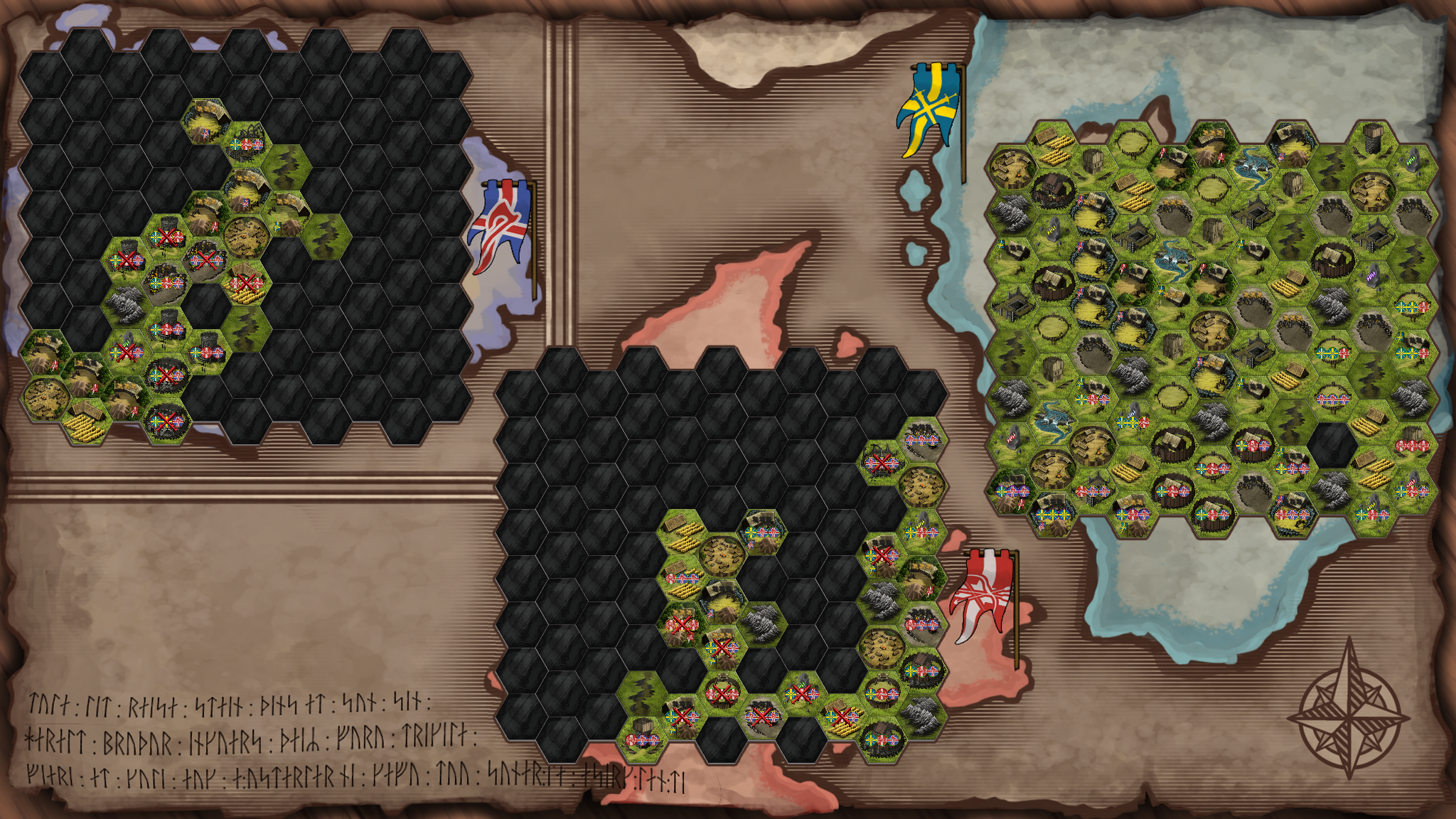 The game map: There are three maps to conquer in Valhalla, Raids & Gold, each one increasing in difficulty and value. The first one holds mostly tier 1 tiles, the second mostly tier 2 and the last one exclusively tier 3 tiles. For each tile there are three objectives to invade, giving you access to more and more of the tiles perks and resources. You cannot invade every tile from the beginning, instead, completing the “expansion” objective on a tile will give you access to the surrounding tiles and the ability to invade them or scout ahead to be able to plan where to go next.

The picture above shows the options and info given when selecting a tile on the map: the invasion objectives, the type of vikings guarding the tile and what income the tile will grant. As your empire expands you will also be able to view other players empires, gain aid from your allies with boosting income of your tiles, and raid the empires of others.

This was my third post about Valhalla, Raids & Gold. I’ve now shared some of my experience with working on this game and some info about how the game works. The game is in large part finished but it may still take a while until it’s available on the market. I’ll make sure to make updates if anything important happens, and I may also make more posts about it or about what I’ve learned while working on the project.

Thanks for looking and have a great day!