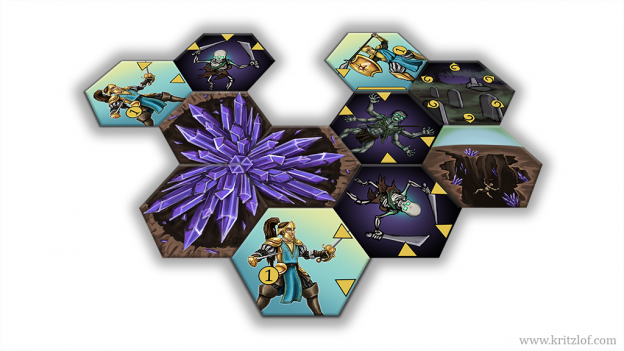 For the latest year I’ve been thinking more and more about designing a board game. I have a passion for board games and the thought of making the art for one has become almost more appealing than making art for video games.

Because of this I have during the last few months been working on a game and I now have a prototype which I’m playtesting. I’ll continue posting more updates and details about the  development of the game, but I’ll start with sharing the basic pinciples right here:

“Battle of the Meteor is a short tactical game where 2-5 players take the role of different races and fight over a magical meteor that recently struck the land. The game uses hexagonal tiles that are laid like a puzzle where all players use their unique faction deck and try to place their units in the most favorable positions.”

As I mentioned the game is still in the prototype phase, as is the art assets, but in this early mockup image you can get a sense of how the game is supposed to look in action.

I look forward to sharing more details about the project soon!